​How to Prove Medical Malpractice

back to news & articles »

Medical care is something we all want access to and hope we never have to use. Doctors, nurses, and first responders are trained to handle emergencies, offer appropriate care, and work with patients to give them the care they need. But what if the remedy does more damage than the ailment? Sometimes things go wrong, and a bad situation can worsen, leaving you feeling alone, isolated, and wondering how you will even begin picking up the pieces.

What Is Medical Malpractice?

To understand how to prove something is medical malpractice, we first must look at what it is. The essence of medical malpractice goes back to the Hippocratic Oath, where doctors pledge to “do no harm.” Most doctors today will tell you that they have never actually sworn any such oath, but they are bound to the ethics of that oath by the written law.

According to the National Library of Medicine, medical malpractice law in the United States stems from English common law. Rulings in various state and federal courts have shaped it here, as have legislative statutes and executive regulations. These laws protect patients from harm and prevent others from further negligence or injury under the care of physicians.

The Four Points of Medical Malpractice 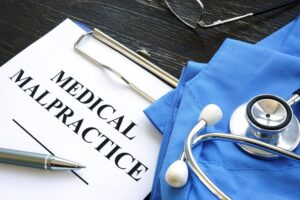 To meet the criteria of medical malpractice, it is up to the injured party to prove four points:

Did the Doctor Owe a Professional Duty to the Patient?

In other words, was this doctor your doctor or nurse? Were they supposed to be treating you? Is this the doctor that was responsible for your treatment at the time? It might go without saying, but it also needs to be considered whether or not this was a licensed medical professional. As such, they have the training and know-how to provide professional duty.

Did the Doctor Breach a Professional Duty to the Patient?

As a professional, doctors and nurses are held to their profession’s standards, ethics, and obligations. Either through professional practice guidelines and standards or what is deemed acceptable, standard care within the scope of their profession. To put it bluntly, does this doctor know what they are doing?

Some basics of licensure usually ensure that their treatment methods will adhere to medical standards of practice. It means they aren’t experimenting on patients using unorthodox methods, and they have a basic understanding of their job and their abilities to do their job.

Another criterion in place to ensure the professional duty to the patient is that the doctor is fit to perform their professional responsibilities, such as not being intoxicated or otherwise impaired.

Did the Breach Cause Injuries?

Once it has been established that your doctor breached their professional duty, you must prove that your injuries resulted from that breach. Unfortunately, even if they were in breach, such as not being certified to perform their duties, impaired, or outside of the scope of their training, it isn’t malpractice until someone suffers an injury.

Rough treatment, leaving surgical instruments inside a patient, ignoring conditions such as medications or allergies indicated during a procedure, and removing or amputating the wrong limb or organ are all examples. Taking too long to deliver a baby or ignoring jaundice could also be considered a breach since it would result in other serious injuries such as cerebral palsy or brain damage.

Did the Breach of Professional Duty Cause Damages?

These ripple effects can radiate from the injury or loss:

As you can see here, it is one thing to be upset with a doctor and the type or quality of treatment you may have received and something else entirely to correlate that with medical malpractice.

A medical malpractice attorney can look at the evidence of your case, such as injuries, witness (expert and eye-witness) statements, and how your injuries have affected you due to the breach of conduct. It will be up to them to argue your case before a judge and provide leverage in negotiations to see what settlement the hospital and insurer are willing to agree to.

Medical malpractice also needs testimony from a medical professional. This expert witness would need to attest that the accused did not act within the expected standards of care to provide proper treatment, resulting in injury due to negligence or malpractice.

Often the evidence of negligence or malpractice is obvious, but in some cases, it is more oblique. Your lawyer can find professionals to argue this case before a judge if necessary.

The matter is often handled discreetly, and a settlement for damages is usually offered with a non-disclosure agreement. The doctor is often flagged professionally as having been involved in a malpractice case, and the details of that accusation may or may not be available.

To some, restitution for damages isn’t enough, and they may take the matter to court. They might believe that the doctor may harm others with their breach of professional duty and need to be held accountable for their actions.

If the offense is, without a doubt, so grievous and outside the standards of treatment, a case will likely be taken to trial. However, as with many personal injury cases, much of the matter is settled in negotiation with insurance companies, hospitals, and other liable parties. Your Chicago medical malpractice lawyer can work with you to get a settlement, or they can pursue the matter into litigation and a trial by jury.

Charges can be filed in civil court or criminal court, or even both. Medical malpractice could result in assault charges, manslaughter, and even murder, depending on the case.

If convicted, the party at fault could be stripped of their medical license, fined, or even imprisoned (if convicted in criminal court), depending on the charges filed and the severity of their actions. Your attorney can discuss the elements of the case and give you a better idea of possible outcomes.